"I will bask in the creative after glow of Wendy Goldman Rohm's writers' courses
for a long, long time. During my many years as a literary agent, I attended numerous
writers conferences, but none of them came close to the extraordinary events for writers that
Wendy presents.  Wendy, who is a best-selling author, is also a respected literary agent.
She has the gift of inspiring writers to expand their visions and hone their crafts, and of
sensibly instructing them how the publishing world works. To be under the spell
​of Wendy's wise wand, and to be supportively surrounded by other
writers who are working on their books or scripts, is to be richly nurtured
in the imaginative realms of words, stories, plots, themes, beliefs, characters, time,
place and narrative voice. I return to my own writer's desk enlightened, enriched
and energized. I am blessed by new friendships with fellow writers
and am filled with gratitude for the grand literary dame
who brought us all together."
--Phoebe Larmore, literary agent to Margaret Atwood , Tom Robbins, and more. 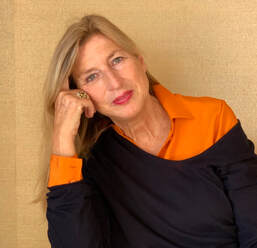 LIVIA MANERA SAMBUY is an Italian literary journalist and contributing editor to the literary pages of the leading Italian daily newspaper, Corriere della Sera. She is the author and co-director of two documentary films on Philip Roth (Philip Roth Unmasked, PBS, American Masters Series, 2013; and Philip Roth sans Complexe, ARTE, 2011) and the book You’ll Never Write About Me Again (Feltrinelli, Milan, 2015).  Her forthcoming book, In Search of Amrit Kaur: an Indian Princess in Wartime Paris, will appear in Italy (Feltrinelli, September 2022); US and Canada (Farrar, Straus and Giroux, April 2023) and in the UK and the Commonwealth countries (Chatto & Windus, spring 2023).  Since 1999 she’s been a staff writer of the Italian leading daily newspaper Corriere della Sera, writing profiles of American, British and Indian authors; and reviewing their fiction and nonfiction books. ​
JOIN OUR LIST
Also: Special weekend workshop in Andros, Greece
June 18 - 19, 2022
Filmic Storytelling with Bruno Toussaint

About the Andros Writers Retreat & Conference

Choose your conference on the Register page.

"Fascinating...A guide to the finer points of
creative writing, including professional advice
on the business side of getting published, even in
the ultra-competitive US market."
The Nation

Photos from our writers' conferences and authors worldwide.